The SpaceX prototype Starship rocket SN8 exploded today on impact after a high-altitude test flight. For access to live and exclusive video from CNBC subscribe to CNBC PRO: https://cnb.cx/2NGeIvi

SpaceX launched its latest prototype rocket on a flight to about 40,000 feet altitude on Wednesday, a test which appeared successful until the very last moment.

Starship prototype Serial Number 8, or SN8, launched smoothly into the sky above SpaceX’s facility in Boca Chica, Texas. The rocket appeared to complete several of the development objectives it was aiming for, including testing its aerodynamics and a flip to prepare itself for landing.

But the rocket exploded on impact as it attempted to land, after flying for nearly seven minutes. As it was a test article, the prototype did not have any crew onboard and SpaceX had cleared the launch facility of people in the hours before the launch.

Starship SN8 is built of stainless steel, with the prototypes representing the early versions of the rocket that CEO Elon Musk unveiled last year. The company is developing Starship with the goal of launching cargo and as many as a 100 people at a time on missions to the Moon and Mars.

The company is building and testing the Starship prototypes at its growing facility in Boca Chica. The facility on the coast of the Gulf of Mexico, about 20 miles east of the Texas city of Brownsville on the Mexico border.

Despite the explosive ending to the test, Musk quickly shared his enthusiasm for the overall results of the flight. Overall, the flight marked a major step forward in the company’s Starship development.

Musk added clarification on the cause of the hard landing, but said the company “got all the data we needed” from the test.

Given the multiple milestones SpaceX was looking to achieve with the test, Musk had given the rocket low odds of complete success on the first try.

“Lot of things need to go right, so maybe 1/3 chance” of the rocket landing in one piece, Musk had said.

SpaceX similarly cautioned in statement on its website before the launch that even a crash or explosion was not necessarily a failure for this flight.

“With a test such as this, success is not measured by completion of specific objectives but rather how much we can learn, which will inform and improve the probability of success in the future as SpaceX rapidly advances development of Starship,” the company said.

Musk has pivoted the company’s attention to Starship ever since SpaceX in May successfully launched its first astronaut mission. He’s deemed Starship the company’s top priority, declaring in an email obtained by CNBC earlier this year that the development program must accelerate “dramatically and immediately.”

Last year Musk said that Starship could potentially fly people in 2020, but he’s since acknowledged that the rocket still has many milestones, including “hundreds of missions,” to go before that happens.

To date SpaceX has built 10 Starship prototypes, with the company saying that Starship SN9 is almost ready to launch. SpaceX now has two active test stands at its Boca Chica facility, “for rapid development testing.”

Turn to CNBC TV for the latest stock market news and analysis. From market futures to live price updates CNBC is the leader in business news worldwide. 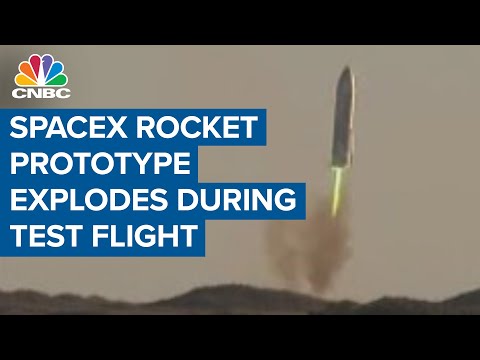 The SpaceX prototype Starship rocket SN8 exploded today on impact after a high-altitude test flight. For access to live and exclusive video from CNBC ...